You may well be asking yourself just what exactly are the health benefits of apricots. Do we care, and if so, what real benefit can we derive from them. Well, for one thing, the flesh of apricots are a bounty of beta-carotene, and we can all do with this vital antioxidant. While this intense amber pigment is abundant in many fruits and vegetables and plays a significant role in your health and well-being, beta-carotene also converts to vitamin A.

You could say that the flesh of the fruit has a kind of healing power that will not only protect your eyes but protect your heart too. And we haven't even got to another critical aspect of the apricot, the pip. That also is said to have cancer healing powers.

The Burusho, also known as the Hunza people of Northen Pakistan grow apricots for a living, and the pips are used in other parts of the world to help in the control of various cancer preventions. Some health shops stock these pips. Having said that and should you want to purchase some, you shouldn't eat more than five pips a day as they contain small amounts of cyanide. Too much cyanide can be extremely dangerous and cause death. Some of the top men in Hitler's Reich could bear testament to this - or maybe they can't, as they all died from cyanide poisoning, even Hitler's mistress. 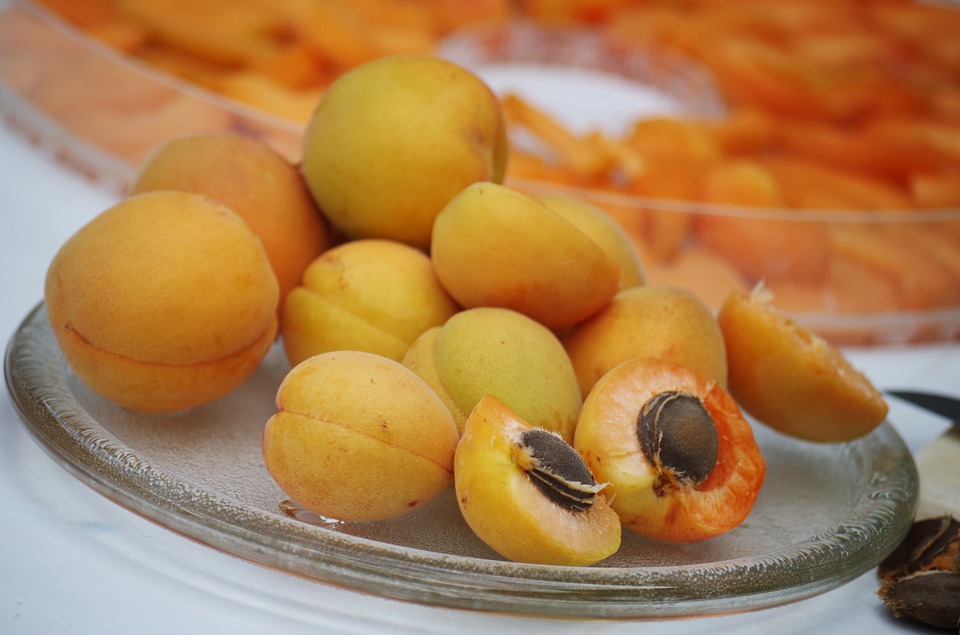 The idea that apricot pips used as a medical substitute date back to the 1920s when Dr Ernst Krebs put forth a theory that amygdalin, a compound found in apricot pips and converted to cyanide in the body could destroy cancer cells. Some thirty years later, his son reformulated the extract and named it Laetrile. By the 1970s, people with cancer who felt that they couldn't find any real answers for modern medicine were travelling to obscure clinics (mainly in Central America such as Mexico) and paying exorbitant prices for this new "miracle" cure. The film star Steve McQueen had tried this treatment in the late '70s but eventually died from a heart-related disease. So popular was Laetrile that at one time it was available in health food stores in 27 American states.

While I was studying the findings of Macrobiotics (A Zen Buddhist philosophy) wherein the yin and yang aspects of certain foods brought about elements of balance and harmony for a healthful lifestyle, I met a novelist and cancer sufferer. Who, after trying all the conventional medical treatments, flew to Mexico for the controversial Laetrile treatment. Sadly he passed away shortly after that. Laetrile is a bitter substance found in fruit pips such as apricots as well as some raw nuts, lima beans and sorghum. It makes hydrogen cyanide which is then changed into cyanide when absorbed by the body. Having said this, I think you may want to stick with just the flesh of the apricot.

Today, Laetrile cannot be legally sold in the USA, although it's readily available in Mexico and other countries. Does Laetrile work? According to "most" experts, the answer is an emphatic no. "They" also say that Laetrile is not only useless but also potentially fatal. A study at the Mayo Clinic in Rochester, Minnesota, found that Laetrile frequently caused nausea, vomiting, headaches and other symptoms of cyanide poisoning. They also say that Laetrile is dangerous for another reason, but some people depend on it instead of turning to a "safer" and more effective cancer therapy. Well, you can't blame all these cancer sufferers for trying because the safer and more effective cancer therapy certainly didn't work either and was also found to cause nausea, vomiting and who knows what else.

Never mind Amygdalin, Laetrile or Cyanide, does the medical sect also tell you how dangerous arsenic is for you when it's a well-known fact that both white and brown rice contain traces of arsenic. Yet, for many of the world's population, they continue eating the stuff. It makes you think about all the different foods we put in our mouths. You can't seem to trust anyone these days, including the medical sect.

I've made it my mission to try and find all the answers or at least, most of them. If you like what I've said so far you may want to read some of my other controversial articles on the food and drink we consume today without regard to the dangers within. I do know that when I was studying and researching alternative medicine and better eating practices to find better ways to sustain a healthier lifestyle. I try to leave no stone unturned.

When we hear the words Cyanide or Arsenic, we immediately think of death. After all, history tells us that Hitler's newlywed bride and many of his inner circle committed suicide after ingesting capsules filled with the deadly stuff. Nevertheless, a little bit of cyanide or arsenic won't kill you. I have personally eaten five apricot pips over time, and no harm has ever come to me. However, some of my family have succumbed to cancer using safer and more modern cancer treatment.

A while back and if legend would have it, Chinese brides believed that if they nibbled on an apricot, they'd be able to increase fertility. It might sound odd until you realise that maybe there is some truth to the story. You see, apricots are high in a mineral needed for the production of sex hormones. I don't know how long ago this story came about because as far as I know, the Chinese government had a long-standing policy on one family, one child.

These days, however, few people are likely to rely on apricots to influence the size of their family. No matter what angle you take, there's no denying the health benefits of apricots, especially when they contain a variety of compounds that research shows can help fight infections, blindness, cancer and heart disease.

Most of the health benefits of apricots are due to their copious and exceptionally diverse carotenoid content. Carotenoids are the pigment in plants that paint many of our favourite fruits and vegetables red, orange and yellow and that in humans have a wide range of health-protecting properties. Researchers have identified at least 600 different carotenoids with some of the most powerful, including beta-carotene, is found in apricots. Apricots are the best foods to look to for carotenoids according to the American Institute for Cancer Research in Washington D.C. 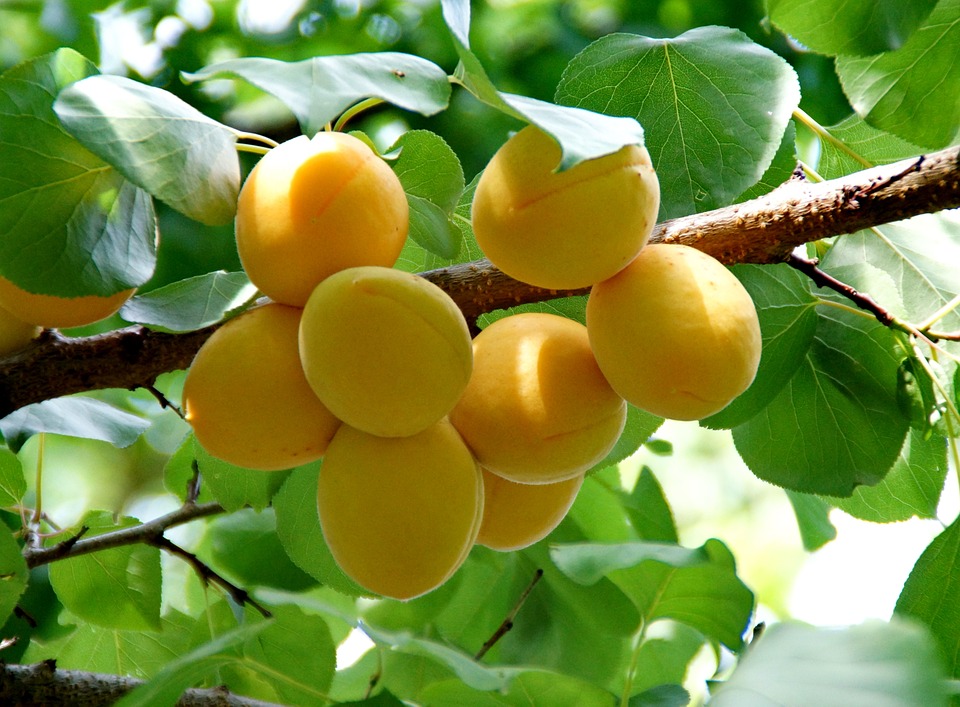 Health Benefits of Apricots - Fruit for your Heart

The health benefits of Apricots have a unique mix of healing compounds that make this food a powerful ally in fighting heart disease. Along with beta-carotene, apricots contain lycopene, and both compounds have been shown in studies to fight the process by which the dangerous low-density lipoprotein (LDL) form of cholesterol turns rancid in the bloodstream. It's vital because when LDL is of poor quality, it's more likely to stick to artery walls. Lycopene is one of the most potent antioxidants we know.

A 13-year study found that those with the highest intakes of carotenoids had a one-third lower risk of heart disease than those with the lowest intakes. Apricots are a good source of beta-carotene. Three fruits contain 2 milligrams, about 30 per cent of the recommended amount. 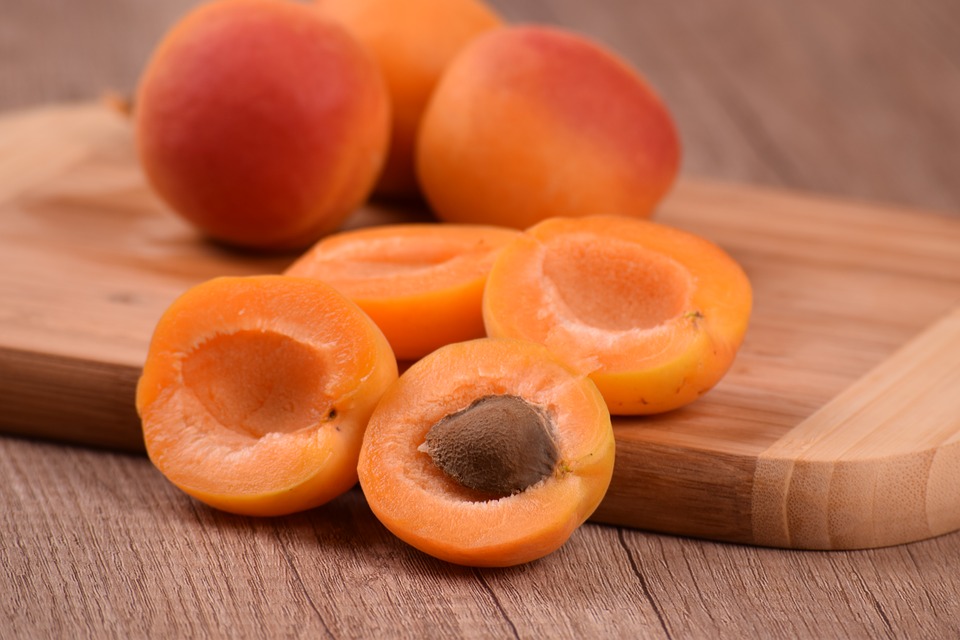 Health Benefits of Apricots - Good for your Eyes

Even if you don't have the spinach-loving personality of Popeye, you can get lots of vitamin A by eating apricots. (The beta-carotene in apricots converts to vitamin A in the body.) This nutrient helps protect the eyes, and as it turns out, the eyes need all the help it can get.

Every time light passes through the eyes; it triggers the release of tissue-damaging free radicals. Left unchecked, these destructive oxygen molecules attack and damage the lenses of the eyes, possibly setting the stage for cataracts. Free radicals can also attack blood vessels supplying the central portions of the retina, called the macula. If the blood supply gets cut off, the result can be macular degeneration, the leading cause of vision loss in older adults.

Vitamin A has been shown in studies to be a powerful antioxidant - that is, it helps block the effects of free radicals. Women who got the most out of vitamin A in their diets reduced the risk of getting cataracts by more than one-third. Three apricots provide 2,769 international units of vitamin A, 55 per cent of your Daily Value (DV). 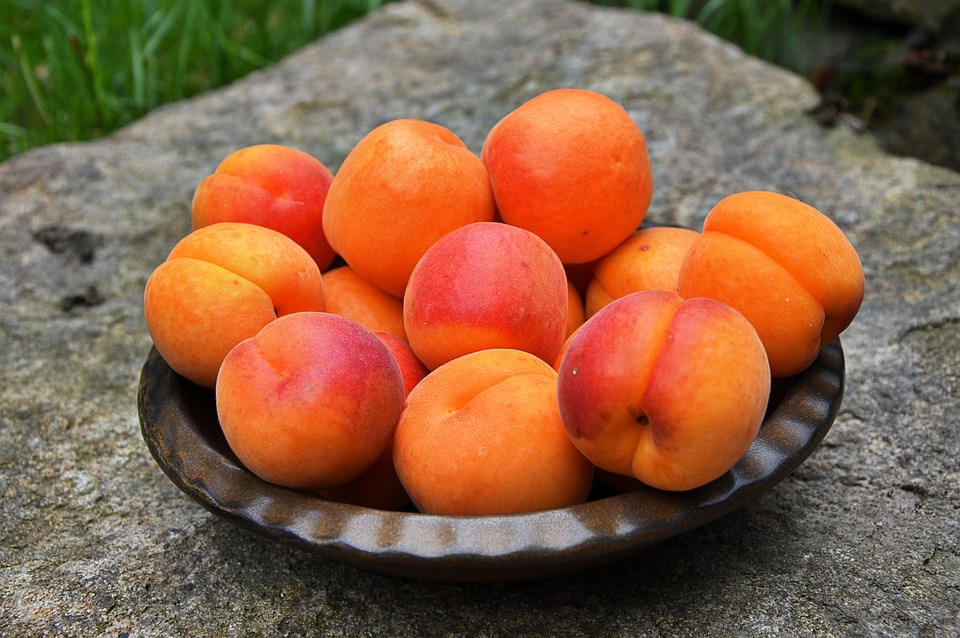 Health Benefits of Apricots - A Form of Fibre

It's almost impossible to exaggerate the health benefits of apricots when it comes down to getting enough fibre in your diet. High-fibre foods can help you lose weight, control high-blood sugar and lower cholesterol levels. They're also essential for keeping digestion regular.

So here's another reason to add apricots to your fruit bowl. Three fruits contain 3 grams of fibre, 12 per cent of the Daily Value. Better yet, that's at a minimal calorie cost - just 51 calories for all three. When you're eating apricots for fibre, however, be sure to eat the skin, which contains a substantial amount of the fruit's fibre. 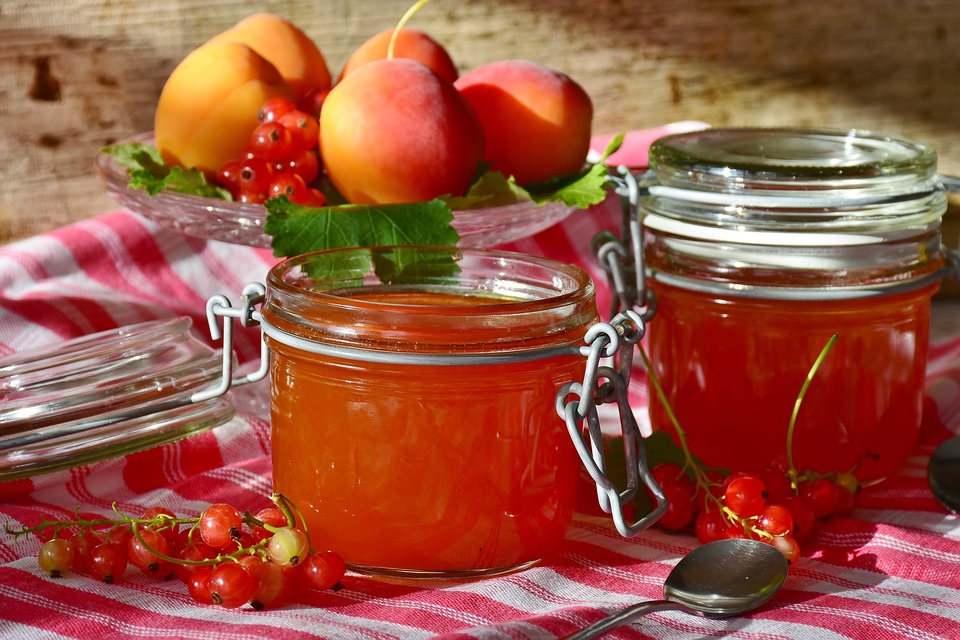 Health Benefits of Apricots - Getting the Most

Eat them firm. Even if you enjoy your fruit nice and soft, it's best to eat apricots while they're still slightly firm. Apricots contain the most nutrients when they're at their peak of ripeness. Once they start getting soft, these compounds quickly begin to break down.

Shop for colour. Unlike most fruits, apricots can be yellow or orange and still be ripe. Both colours are acceptable when you're trying to get the most healing benefits. However, apricots that have green in them were picked early and may never ripen, which means that you lose out on much of the healing goodness.

Store them carefully. It's essential to keep apricots cool to prevent them from getting overripe. Unless you're going to eat them within a day or two, it's best to store in a fruit bin in the refrigerator where they'll keep for about a week.

Here's another storage tip. Because apricots are such a soft, delicate fruit, they readily pick up flavours - from other fruits stored along with them, for example. Or even from refrigerator smells. But it's a good idea to store them in a paper or plastic bag.

Other fruits with health benefits you may like to try