Health from the Vine

Not just because we love this big and bold fruit, the health benefits of watermelon contains some fantastic healing powers too. And who as a kid doesn't love gauging on the juicy reddish flesh? When all is done and dusted, there's always the possibility of engaging in a massive watermelon fight with all the leftover rinds. I remember participating in this ritual many times as a child. Even though it was a rather messy affair, it was also so much fun. Well, apart from all the exciting activities of this bootylicious fruit, let's tuck in and see where it takes us.

There's always something exciting about cutting through the thick protective green rind of ice-cold watermelon and revealing its sweet red flesh. Even before you start cutting, most melons will whet your appetite but once it releases its rich, penetrating scent, you'll be gobsmacked and won't be able to resist its succulent flavour.

All melons, including watermelons, contain potassium which is essential for keeping blood pressure at healthy levels. And because melons are low in calories and fat, they're the perfect food for waist-watchers and weight-watchers.

There's another good reason why the health benefits of watermelon are so damn marvellous. They contain several substances that are excellent for your health. Not only are watermelons so beneficial but cantaloupes, sweet melon, honeydews and a few other melons like those know in South as spanspek, provide folate. This B vitamin has shown to lower the risk of congenital disabilities, reduce the risk of cancer and heart disease as well as keep blood pressure low. 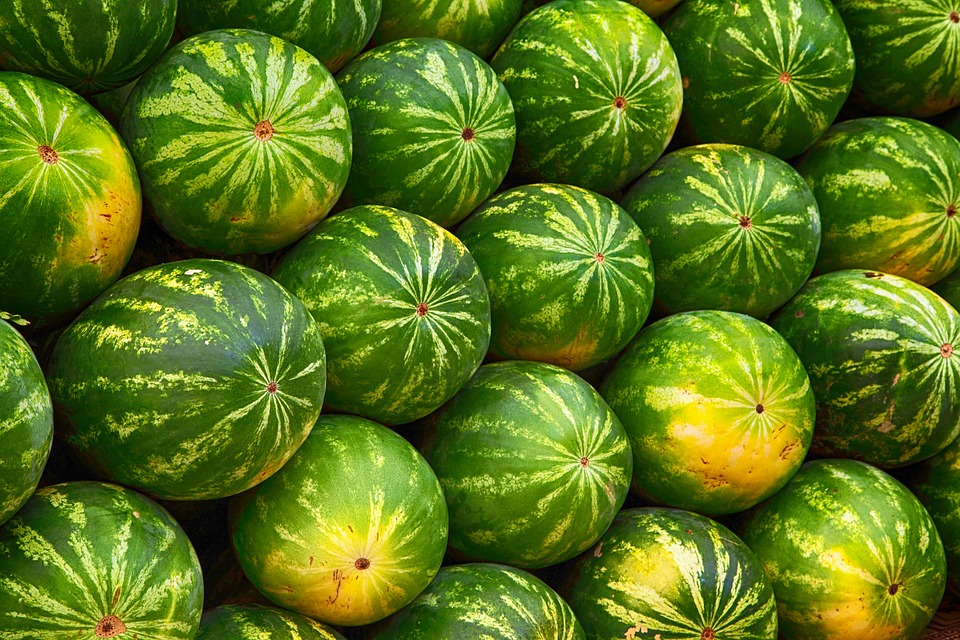 In what was perhaps the most significant discovery of the twentieth century, researchers found that if all women of childbearing age consumed at least 400 milligrams of folate a day, the incidence of brain and spinal cord congenital disabilities (called neural tube defects) could easily be halved if not more. For a long time, doctors weren't even sure what folate did. They did, however, suspect that it played a role in preventing congenital disabilities, but somehow, there just wasn't strong enough evidence to prove this theory.

Then a study of almost 4,000 expectant mothers revealed that those moms who got enough folate were 60 per cent less likely to have children with brain and spinal cord defects than moms who got only small amounts. Folate, a B vitamin, is an essential ingredient when cells are dividing rapidly.

Folate serves a kind of shuttle bus that carries fragments of proteins (amino acids). When folate levels are low, these fragments, lacking transportation, may be left behind. And as a result, the newly formed cells may have defects that can be lead to congenital disabilities. Later in life, the same problem can lead to cellular changes which, in turn, can lead to cancer.

So to all of the moms-to-be out there - before you start reaching for those pickles we know you love, at the supermarket, instead put a few melons in your trolley because they are a great source of folate.

Incidentally, it's not only moms-to-be who should be making the most out of watermelon and the rest of their cousins. The same nutrients that protect against congenital disabilities are also good for the heart.

Your body uses folate to control levels of a chemical in the blood called homocysteine. Although small amounts of homocysteine are healthy, too much of it can somehow contribute to the artery-clogging process that leads to heart disease. Low levels of folate are related to too-high homocysteine levels.

Finally, folate has shown to reduce the risk of polyps, precancerous growths in the colon that sometimes progress to full-blown cancer. If you're getting the daily recommended amount of folate in your diet, you'd be less likely to develop polyps in your colon which could be up to a third more than if you were not getting the proper dosage. 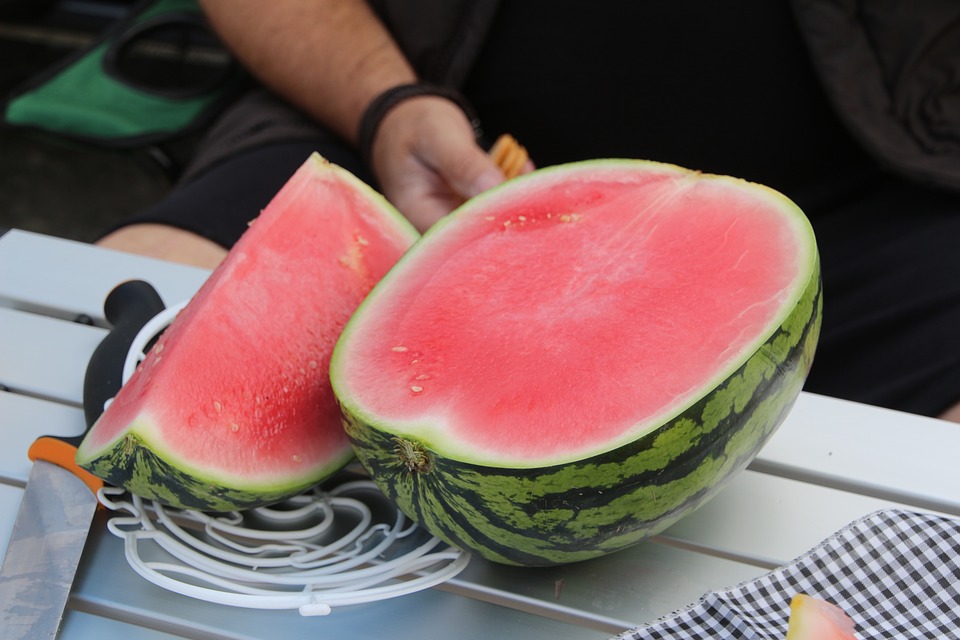 One thing that your digestive tract needs are a steady supply of dietary fibre. Fibre is so important in fact, that if you don't get enough, you'd have a higher risk of cancer as well as a variety of other digestive problems.

The type of fibre found in watermelons and other melons is called soluble fibre. It is tremendously crucial for helping to keep your colon healthy because soluble fibre absorbs water as it moves through your digestive tract, it causes your stools to get heavier and more substantial, which is a good thing. As a result, they move more quickly through your intestine, reducing the amount of time that harmful substances in the stools are in contact with your colon wall. 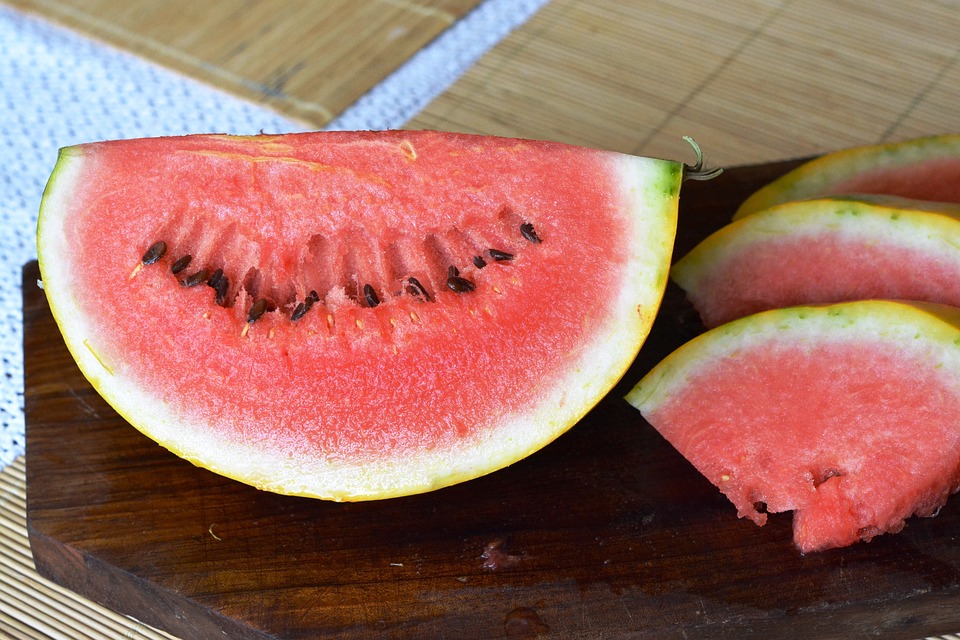 Other essential health benefits of watermelon are that just 1 cup (46 calories) offers around 20% of your Daily Value (DV) of vitamin C and about 17% of vitamin A. Also 1 cup of watermelon has one and a half times (6 milligrams) the amount of lycopene than a large tomato (4 milligrams). Lycopene, an antioxidant found in red fruits and vegetables may help fight heart disease and many types of cancer.

Watermelons are also an excellent source of potassium which is perhaps the most critical mineral for keeping blood pressure down. The potassium in watermelons acts as a natural diuretic allowing the removal of excess fluids from your body. It's vital because when fluid levels are too high, blood pressure can rise. Plus, potassium keeps the artery walls relaxed.

Because relaxed arterial walls do not contract as sharply as more rigid walls do, the blood pressure created with each heartbeat is not as high. The result means lower blood pressure. It, of course, can help reduce the risk of heart disease, stroke and many other severe health conditions. 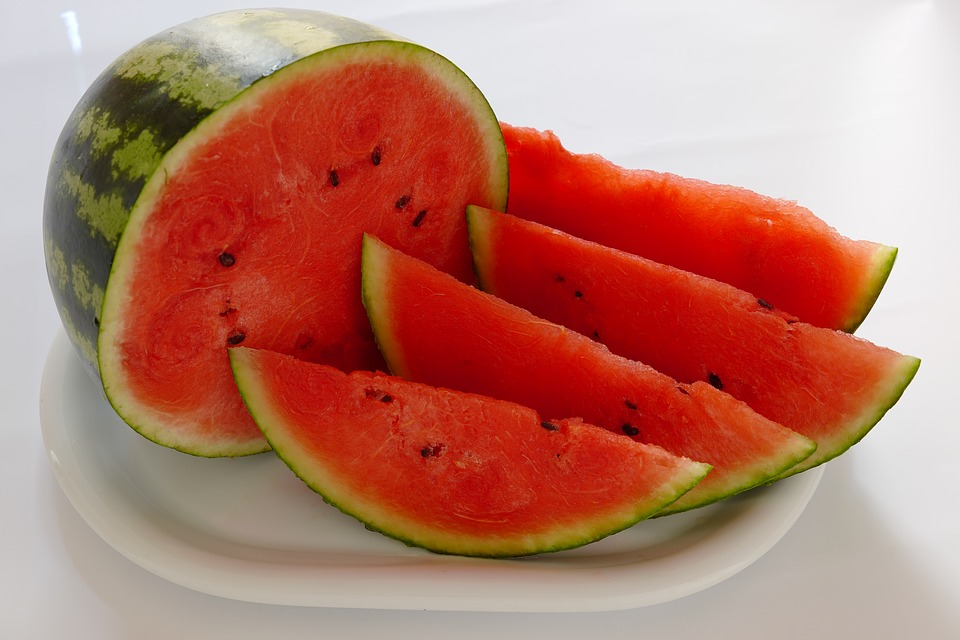 Health Benefits of Watermelon - Summing up all the Facts

Even though watermelon is a decent source of nutrients, it contains so much water that they're very diluted. Ounce for ounce, honeydews have over twice the potassium and almost three times the folate.

Because of their size, supermarkets often sell watermelons and honeydews in halves. It could be a blessing and a curse. While this may save space in your refrigerator, it may not save much in the way of nutrients. When the melons are cut and exposed to light, the nutrients start to break down.

While it's a good idea to buy melons whole, if you're a single person or a small family, this may not sound so good. The solution would be to buy them whole and once you've cut the melon, whatever you're not eating, immediately place it in the refrigerator. That way, you'll prevent the nutrients from breaking down.

While folate is known to be destroyed by heat, it's a good idea to keep them cold. Whole or cut melons you should store in a cool, dark place. 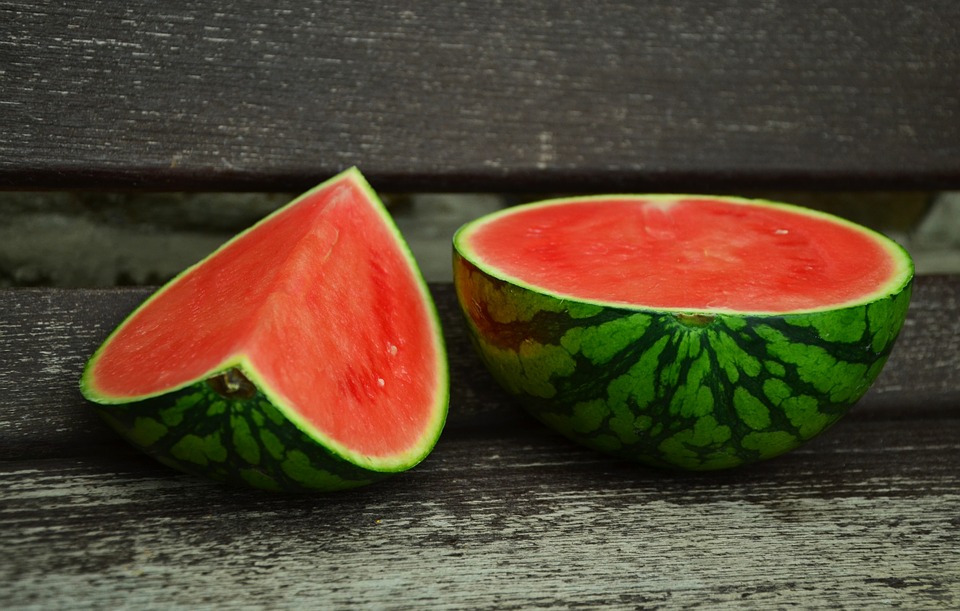 They say that whoever invented the wheel was a watermelon fan. Only perhaps because of its cylindrical shape and its tendency to roll - usually off your table thus sometimes creating a melon mess. They also say that there's a problem with this shape. You can't stack them, and they take a lot of room to store which can be expensive for watermelon growers. Well, you don't always want to believe what they say.

Perhaps "they" could take a lesson from Pakistan. While it may take some considerable time for the average person, watermelon growers in Pakistan know just how to stack them quickly in the shape of a pyramid ten feet tall as seen in one episode of The Amazing Race—saving time and space.

In Japan, however, where space is a premium, growers hit on an ingenious solution. Why not square watermelons. When the melons were young and still on the vines, Japanese growers would put them in boxes. As the fruits grew and filled the space, they developed flat bottoms and sides, thus making them perfect for stacking. 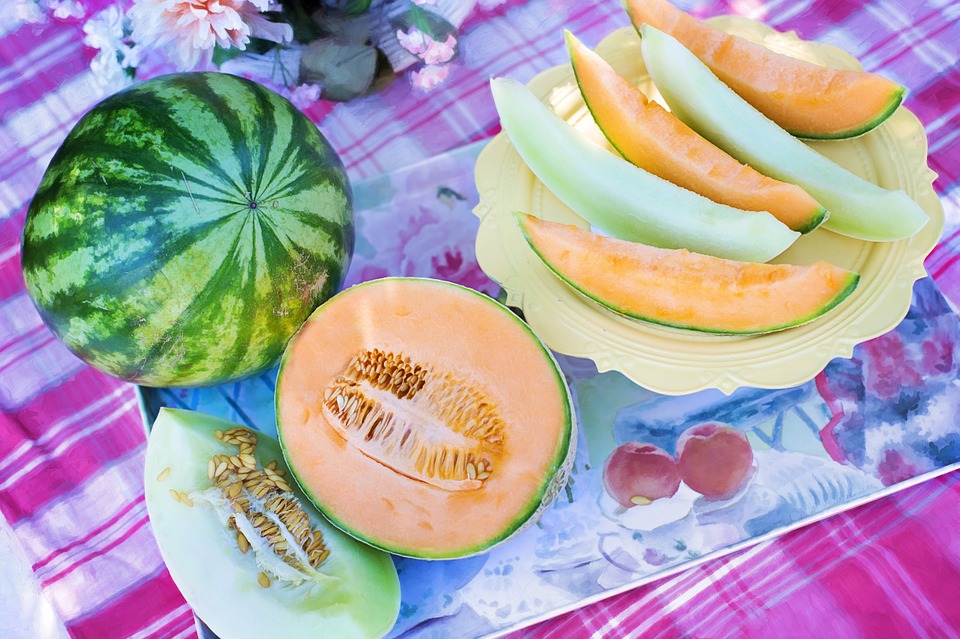