Part of the Cancer Prevention Program

Do you know or have even heard about the Macrobiotic Diet? I first became aware of it in 1986 when I was fortunate enough to meet Dirk Benedict, at the time a well-known film and television actor from Montana in the Northwestern United States. I didn't meet Dirk in America. I met him in Africa when he was invited by a banking institution to save the white African rhino. It's a shame that some people from different parts of the world come to Africa to shoot all these big, beautiful creatures.

Anyway, you might know Dirk through the well-documented television series called the A-Team. Dirk was one of four characters known as "faceman". He was this handsome guy who, while staying out of trouble, would get the job done and dusted, much like the character in the television series called MacGyver. Dirk was also the main character in the hugely popular film Battlestar Galactica, fighting the odds in outer space.

The reason why I'm mentioning Dirk Benedict here is that he was on this Macrobiotic diet due to prostate cancer he got when he was just 29 years of age. And only like women hold their breasts in high esteem, men don't want to let go of their prostate either, especially at such a young age. Not only did Dirk go on to cure his cancer through a rigorous eating plan focusing on all the foods in the Macrobiotic diet, but he managed to cure arthritis in his hands when he was just 18 years of age.

Dirk is now 74 years old and still in good health. Just like there's no such thing as a get rich quick scheme, healing the macrobiotics way can take years to cure depending on how long cancer has been there and also on a person's lifestyle and eating habits. It's nothing like a quick fix.

From what I know, it took about three years before Dirk's cancer was in remission and a further five years when he got a full clean bill of health. The reason why some people don't succeed with Macrobiotics is like most things, people want to be fixed up in no time and haven't got the guts to persevere.

Macrobiotics is something you have to embrace and go through the long-haul. It's by no means an easy road, and then there's all this "new food" you have to eat, and some people cannot give up all that meat protein. Well, Dirk took the long road and survived. He went on to write a book about his experiences called Confessions of a Kamikaze Cowboy. Kamikaze because that's what it felt like during the hardship and cowboy because of where he lived. A cowboy county of Montana.

At the time of meeting Dirk, I was veteran vegetarian for 23 years and due to some personal and tragic circumstances of my own, came across an article about this famous actor who was on his macrobiotic diet. I needed to find out more as I had never heard of Macrobiotics before. Macro meaning something large or big and Biotics meaning life. Put the two together, and you have significant experience. It started me on a new road of discovery.

I helped myself with a new understanding of food and what it can do for you to make life that much better health-wise. I went on to study the principles therein. I also discovered one crucial aspect that some people living on a vegetarian diet are not necessarily eating the right types of food. You cannot possibly maintain a healthy living the vegetarian lifestyle if you are continuing consuming junk food like coca-cola and greasy fried chips even though they have nothing to do with consuming animal protein. There's this misconception that if you don't eat animal products, that somehow you'll not get enough protein. Very few of us realise that plant-based protein is far superior to that which comes from farm animals.

When applied correctly, the guidelines created around macrobiotics stabilise a state of overall physical, harmonious and mental balance based on the yin and yang principles. Everything in life is either yin or yang. They are two opposing elements that come together in perfect harmony. Just like opposites attract they blend with a perfect balance. George Ohsawa, born Nyoichi Sakurazawa in Japan, was the founder of the macrobiotic diet. There were several health issues within his family, including his own and George need to find some answers to this.

Eating according to macrobiotic principles may provide health benefits to some when used in a complementary way because plant-based foods mostly support this formula. However, there is no hard and fast rule for leaving out meat altogether. Meat products such as beef, chicken and fish should only be sparingly consumed on special occasions such a birthday or any other day when there's a cause for a celebration. Macrobiotics is considered more of a high carbohydrates low protein diet.

When I talk about carbohydrates, I'm referring to complex carbohydrates such as whole grains, vegetables and other plant matter and not simple carbohydrates such as sugary foods and white bread and rice. Macrobiotics has a strong focus on high-carbohydrate entire grains like brown rice, whole wheat, barley, quinoa, oats, millet, corn, rye and buckwheat as well as a variety of vegetables, legumes, lentils, nuts and seeds and things like tofu, tempeh and miso.

However, there is one food source the macrobiotic diet that's not high on the list of priorities and that food is fruit. I have yet to understand why this so because fruit has many health benefits. The only conclusion I came up with and that was the fact we should only eat fruit when that particular fruit is in season. Vegetable​s​ ​are​ safe to consume year-round. If you think about it, people living in colder countries wouldn't be eating oranges, for instance, as this type of fruit wouldn't flourish there.

People living in the Baltics eat buckwheat because it's a grain that is native to that part of the world whereas rice and oats aren't. In other words, you should eat the food that is locally grown in that particular region, all the more reason when travelling to eat foods that are in abundance and seasonal. Much of this makes a heck of a lot of sense too.

It's important to understand that macrobiotics is not just a diet in the modern sense of the term, but a way of life encompassing all dimensions of living. From such diverse phenomena as the size and shape of distant galaxies to the movement of subatomic particles. From the periodic rise and fall of civilisations and right down to the patterns of our own individual lives. Macrobiotic philosophy offers a unifying principle to understand the order of the universe as a whole.

Translated "macro" comes from the Greek word for "great" or "long" and "biotics" describes "living" as in organisms such as animals and plants. Macrobiotics means a way of life according to the most significant and longest possible view of living a long and healthy life. In the Near and Far East, the macrobiotic spirit also guided and shaped civilisation.

Dietary common sense and principles of natural healing underlie the Bible, the I Ching, the Tao Te Ching and the Koran as well as many other scriptures. Down through the centuries, we have seen cultural movements surface, and in Asia, the benefits of the traditional way of eating places caution against increasing artificial means.

In the late nineteenth and early twentieth centuries, macrobiotics, along with the lifestyle experienced a revival originating in Japan. George Ohsawa, the founder of the macrobiotic diet, cured himself of a dread disease by changing from the modern refined foods that were sweeping Japan. He then embarked on simple sustenance of brown rice, miso soup (fermented soybean paste) and sea vegetables as well as other traditional foods. Just like Dirk Benedict, after restoring their health, they went on to integrate conventional oriental medicine and philosophy with original Jewish and Christian teachings.

Today macrobiotics is a unique synthesis of Eastern and Western influences. It is the way of life according to the broadest possible view, the infinite order of the universe. The practice of macrobiotics is the understanding and practical application of this order to our lifestyle. It includes the selection, preparation and manner of eating our daily food as well as the orientation of consciousness.

The macrobiotic diet does not offer one singular nourishment for everyone but a dietary principle that takes into account different climatic and geographical considerations, varying ages, sexes, and levels of activity as well as ever-changing personal needs. Macrobiotics also embraces the variety and richness of all the world's cultures and heritages.

In broad terms, the dietary practice of macrobiotics is the way of eating that flourished before the time of Homer to the renaissance. It was also the diet that Buddha ate under the tree of enlightenment and that Jesus shared with his disciples at the Last Supper. It is the diet that helped Moses free his people from bondage and that which sustained the Pilgrims upon their arrival in the new world.

Most of all, macrobiotics is the way of life followed by ordinary people throughout history: Farmers, shepherds, fishermen, merchants, traders, artisans, scribes and monks. From the earliest campfires in the Ice Age to the latest space launches in the Atomic Age, countless mothers, fathers, daughters, sons, babies and grandparents have shared nourishing food together and saved the seeds to plant the following spring.

Perhaps one-day future generations will look back at the cult of modern civilisation and regard its unorthodox food and artificial way of life as a fad that flared up and extinguished itself in a relatively short span of four hundred years. Under many names and forms, macrobiotics will continue as long as human life continues to exist, as its most fundamental and intuitive wisdom. Macrobiotics and the macrobiotic diet offers a key to restoring our health, a vision for regenerating the world and a compass for charting our endless voyage towards freedom and enduring peace. I sincerely hope you got some benefits here.

Also, see my page on macrobiotic food and how it could help you find solutions to some of the health issues you may have.

Vegetables for your Macrobiotic Diet 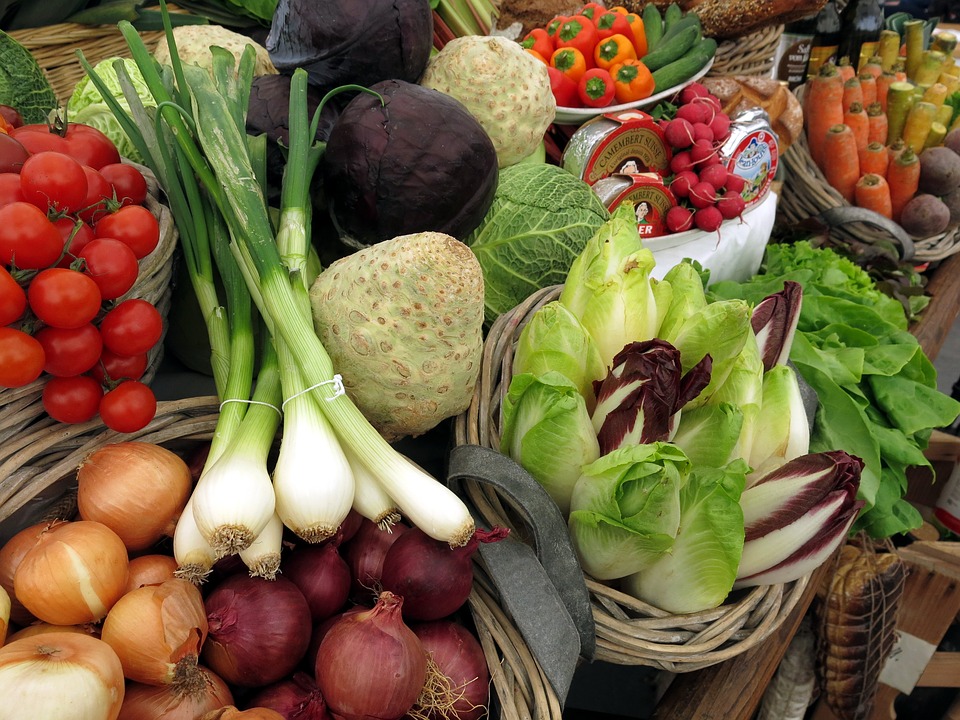